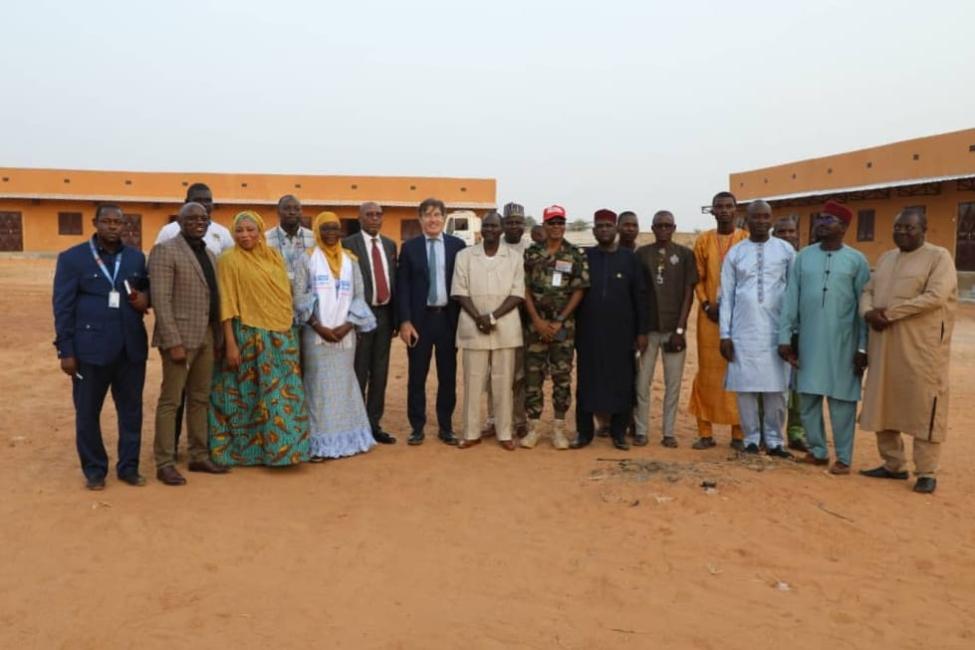 Niamey – This year, the United Nations (UN) in Niger and the Ministry of Humanitarian Action and Disaster Management commemorated the International Day for Disaster Risk Reduction (13 October) at a relocation site for flood victims in Niamey. This year's theme highlighted the importance of improving information sharing on disaster risk by increasing the availability of and access to multi-hazard early warning systems.

The commemorative event brought together a large number of national, regional, and local authorities, the UN, civil society organizations, community leaders, and displaced persons staying at the relocation site.

During the event, the government through the Ministry of Humanitarian Action, the UN and partners renewed their engagement to increase the cooperative measures in building a very responsive, effective disaster risk management strategy that includes an effective early warning system for the communities to be resilient natural disasters.

Representatives of communities displaced by floods in Niamey and hosted at the site, including women and youth leaders, recalled their disaster experience and shared how early warning mechanisms saved their lives. They also advocated for increased support for their relocation in the new site where a school and a health centre have already been built to improve the living conditions of the populations.

"Extreme weather events are inevitable. However, they should not result in deadly disasters. On this day, we call on all stakeholders to collectively implement the Sendai Framework to reduce exposure to these disasters and forced displacement," said Mahaman Ali Adamou, representative of the Minister of Humanitarian Action and Disaster Management of Niger.

"The interventions of the partners through the different clusters illustrate a collaborative effort that is already delivering results, saving more lives and protecting more people while leaving no one behind. But we must not neglect the effects of climate change and land degradation on the increased risk of natural disasters," said Emmanuel Gignac, the UN Resident Coordinator a.i. in Niger. "Reducing our environmental footprint, taking into account endogenous adaptation practices to climate change and land degradation and anticipating extreme weather events, for example, can strengthen the resilience of communities at risk."

As a UN member state, Niger adopted the Sendai Framework for Disaster Risk Reduction 2015-2030 in March 2015, which recognizes the primary role of states in reducing disaster risk. The UN General Assembly has called for a mid-term review of the implementation of the Sendai framework, the findings of which will inform a high-level meeting of the General Assembly in May 2023.

The UN, through the International Organization for Migration (IOM) supports the Ministry of Humanitarian Actions in the mid-term review of the implementation of the Sendai Framework to assess progress in integrating disaster risk reduction into policies, programmes, and investments at national and regional levels.