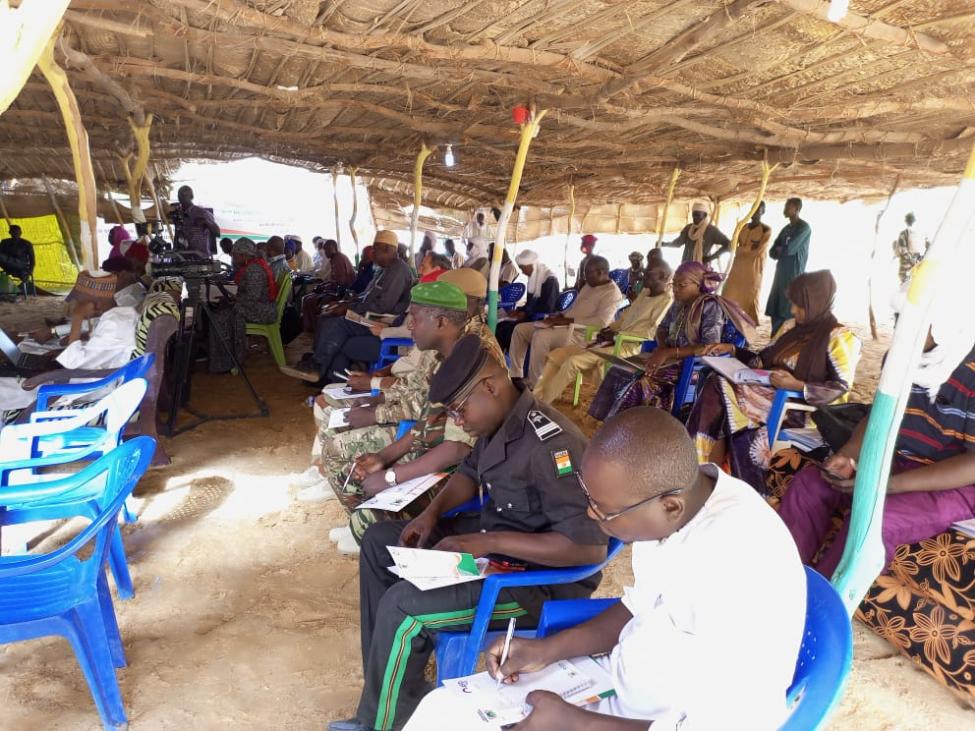 Dirkou – Last week (5 October), a delegation comprised of the President of the High Authority for the Consolidation of Peace (HACP), the Deputy Director of the French Development Agency (AFD) in Niger, the Head of Cooperation of the European Union (EU) in Niger, the Chief of Mission a.i. of the International Organization for Migration (IOM), and senior regional and local authorities from the Agadez region participated in the third steering committee of the Kawar Development Support Project (PADEK).

The PADEK, funded by the AFD and the HACP and implemented via IOM's community stabilization programme, aims to promote social cohesion in Kawar, northern Niger, and improve economic opportunities for vulnerable communities, including youth and women.

The meeting was an opportunity to evaluate the implementation of the PADEK and its impact on peacebuilding in the Kawar and access to sustainable livelihoods for the communities, particularly the youth and women.

"As the challenges are numerous in Niger, and particularly in the Kawar, we will only be able to have a greater impact by working together and feeding off each other's experiences, challenges and successes," said Emilie Garet, Deputy Director of the AFD in Niger.

In the Kawar, the populations of Dirkou, Bilma, Djado, and Fachi, the four communes of the region, have been particularly affected by the changes in migration dynamics linked to the adoption of law No. 2015-36 criminalizing trafficking in persons and the smuggling of migrants in 2015. The various economic activities related to transit migration have long been a means of survival for the communities. The PADEK supports these communities' resilience by promoting peaceful coexistence and strengthening sustainable livelihoods for the economic recovery of the Kawar.

"The principle of HACP is that all projects are community-based, which is, in fact, about meeting the real needs of populations," said Brigadier General Mahamadou Abou Tarka, President of the HACP.

Since its launch in December 2021, the PADEK has been raising awareness of peaceful coexistence through traditional media. After initiating the rehabilitation of the radio stations in Bilma and Dirkou, the radio staff was trained in animation techniques, social dialogue development, and youth engagement. As a result, 9,000 households were sensitized by the two community radios on traditional conflict resolution techniques to manage intercommunal conflicts. Two awareness-raising caravans and an inter-communal football tournament were also organized and brought together 461 men and 291 women.

In its efforts to promote social cohesion and strengthen collaboration between the population of the Kawar and local authorities, the project has contributed to setting up or reinvigorating four local steering committees that have held 51 meetings and community dialogues since the beginning of the project.

In 2021 IOM launched a study to assess the feasibility of setting up market gardening and livestock initiatives in the Kawar. Following the study, 160 youth, including 82 women, were to complete a two-week training in market gardening techniques and integrated crop pest management in Bilma, Dirkou, Djado, and Fachi. The municipalities of these four communes granted the trained youth 40 hectares of land for farming after the training.

"Upon completion, the PADEK should allow for sustainable capacity building of technical services, local elected officials, and community leaders on community involvement and conflict prevention to promote social cohesion and social dialogue. It should as well contribute to providing communities with sustainable means of subsistence to revitalize the local economy," says Peter Kioy, IOM Niger Chief of Mission a.i.